Offensive Rebound by MJ Fields is 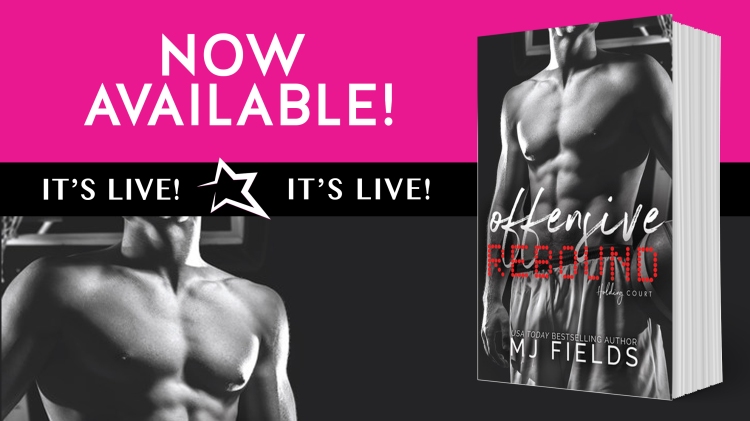 TRAE
It’s a call that changes my life–and my little girl’s. Years ago, playing for the NBA was the dream, but the Seattle Stallions suck. Worse than that, my old teammate is now the star center–not to mention my number one rival. There has to be a catch, some sort of agenda. Before I was injured, I was the best. Now? There’s no way they want me.

But when I see the roster and salaries, it all comes together. It’s a chance to get on the court again and change our lives. And I just can’t wait for the opportunity to finally take him down. What I never counted on is Courtney Cohen being the game changer.

COURTNEY
I inherited the Bad News Bears of the NBA. When I discovered the star center, my ex fiancé, cheating on me, all I want is to jump ship before the whole thing sinks. But with revenge on my mind, I exact a plan. Take down the dirty player and save my father’s dream.

Suddenly twelve minutes is too little time, and a season is not long enough.

“You still afraid of me?” Courtney asks. I push her hair out of her face. “No.” “I’m afraid of you.” “No beer muscles tonight?” I ask, glancing at her empty glasses. She shakes her head. I scoot in closer to her. “Tell me what you’re afraid of.” “Liking you too much,” she says then takes a drink. I turn her in her seat so she’s facing me. “You’re gonna like me even more when I’m inside you.” Her body grows taut. “You can’t say stuff like that. It makes me uncomfortable.” “Well, now I’m going to have to do it more often to get you used to it; make you crave it, beg for it.”

Together with her cousins, she wrote a newsletter and sold it for ten cents to family members.

MJ is a hybrid author and publishes an Indie book almost every month, and is signed with a traditional publisher, Loveswept, Penguin Random House, for her co- written series The Caldwell Brothers. Hendrix, Morrison, and Jagger. All three books in the series are published. The Caldwell brothers don’t grow into alphas, when their mother passes away they become her legacy, her good in the world of bad.

MJ was a former small business owner, who closed shop so she could write full time. She lives in central New York, surrounded by family and friends. Her house is full of pets, friends, and noise ninety percent of the time, and she would have it no other way.