~~~~~~~~~~~~~~~~~~~~~
Every Last Drop: A Vampire Anthology
by Bree Pierce
Genre: Paranormal Romance
~~~~~~~~~~~~~~~~~~~~~~
99 CENT SALE FROM NOW THROUGH AUGUST 8TH
Amazon
Smashwords
Kobo
iBooks
~~~~~~~~~~~~~~~~~~~~~~
Synopsis:
This anthology contains 3 vampire novelettes (each 12-14,000
words) and one short, lighthearted flash fiction piece.
House of Wax:
Evil lies within the wax house. An evil with dark eyes and
blood lust like no other. Out for a taste of revenge, the vampire Maelstrom has
risen once again and is taking out her anger on the small town where she was
encased in wax along with her warriors over a hundred years ago. Odin
Blacksaint is a man with a secret long buried by his family that he thought to
be a fairy tale until people go missing and new evidence comes to light. Now he
must face his long-awaited destiny.

Fate & Fortune:
Once an ill-fated king named Henry VIII reigned. It was a
time of changes for his country and they all started with one woman. A woman
who would turn out to be an abomination. Henry turns to an enchanting fortune
teller named Sybilla for advice, but quickly finds himself enamored with her.
Sybilla, on the other hand, knows the danger that is to come and that could
result from his attachment to her. Nothing is more dangerous than loving a
king.

Natural Born Predators:
In a castle with walls spiraling high, a beast roars, his
sadness floating across the land. The darkness within him brings darkness to
the forest nearby, until one day when she shows up, looking for someone. When
Bell enters his life, Frey’s monster finally recedes and he finds some measure of
happiness. Her occupation as a vampire hunter is dangerous, but their love will
bring about consequences like no other. It re-awakens the forest, and those
that were hiding within it begin moving out. Frey and Bell must protect the
people from the threat about to emerge. 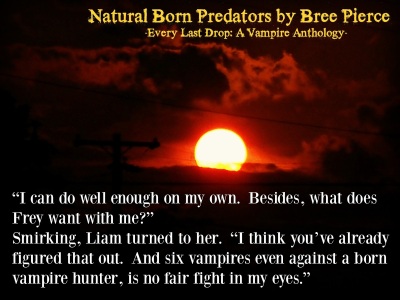 Bree Pierce grew up in a rural area in Arkansas and still resides in a small town in the same state.  As a child she dreamed of becoming an author one day and loved to make up stories about animals and knights in shining armor.  As she hit adulthood and started a family, those dreams were lost for a time, but were revived with a vengeance and now she writes a little bit of everything from shifter fairy tales to vampires, zombies, and a little good old fashioned romance.  Bree is married to a wonderfully supportive husband and has three beautiful children and 2 dogs to keep her days filled with laughter.
AUTHOR LINKS
Facebook
Twitter
Goodreads
Amazon
Join The Bree Pierce Book Club