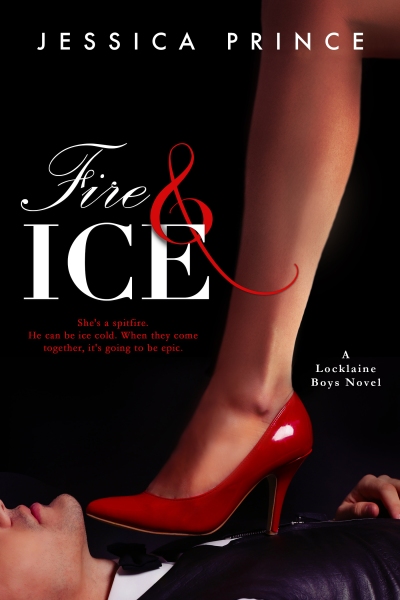 Pepper O’Malley isn’t one to be toyed with. Fool her once, shame on you. Fool her twice and they’ll have trouble finding your body. She used to dream of white picket fences and happily-ever-afters, but now she lives in the real world. As the saying goes, Hell hath no fury like a woman scorned, especially when that woman is a redheaded spitfire.

Griffin Locklaine always viewed commitment as a four letter word. He was clear about what he wanted from the start and made no apologies for it. He didn’t care if he came off cold as ice. He lived for his job, his family, and his friends. He had no desire for a relationship. That was, until he saw the once-young-and-scrawny Pepper all grown up.

They’re like oil and water, fire and ice. A volatile combination that should never work together. Unfortunately fate has other ideas. A spark like theirs left ignored has a tendency to burn out of control, leaving everyone to wonder who will be left standing when it finally explodes. Only one thing is certain. When they finally come together it’s going to be epic.

“You’re beautiful,” he responded, and my jaw hit the floor. That was it. I didn’t know what game he was playing, but I wasn’t going to have any part of it. I’d already let him use me as his own personal game piece once before. I’d be damned if I was going to do it again.

“And you’re officially creeping me out. Unless you want to have my five inch stiletto surgically removed from your ass, you need to back the hell up.”

His full lips twitched with humor as he moved back a few inches—not enough for my liking so I shoved him further. “Have I ever told you I love it when you get feisty?”

I narrowed my eyes in anger. “And have I ever told you I’ve fantasized about setting you on fire?”