It’s our day on the Blog Tour for Jennifer Bonds’ Once Upon a Dare. I am so excited for this sexy new contemporary romance. Jennifer is sharing an excerpt with us and a fantastic giveaway, so be sure to check it all out!

About Once Upon a Dare:

The first night was a dare. The second night was trouble…

Advertising guru Olivia Masterson is all work and no play. But on the eve of earning her dream promotion, her best friend dares her to drop her ice queen façade for one night and seduce a sexy stranger. Olivia’s worked her ass off to get where she is-why the hell not?

Cole Bennett never thought he’d run into his feisty one-night stand at the office, furious that he stole her promotion. No matter how hard she tries to ice him out, they can’t seem to keep their hands to themselves…or their clothes on.

Olivia’s talented-maybe even more than Cole-so when his dropped hints to the boss net her a promotion of her own, he’s ready to celebrate…until she accuses him of fueling office rumors that she slept her way to the top. She wants to earn her own way? Fine. So what the hell does a guy have to do to permanently melt an ice queen?

“I apologize for the interruption,” Olivia offered. “Gabby said to come right in. I didn’t realize you were in a meeting.”

“It’s fine,” Pritchard returned, motioning her forward from behind his heavy cherry desk. Behind him, an expansive wall of windows revealed storm clouds rolling into the city. Although she didn’t care much for the clouds, she would have killed for those windows in her own office. With any luck, she’d have a new office with an equally breathtaking view by the end of the meeting. “Come on in. We were just talking about you.”

“All good things I—”

She stopped dead in her tracks as the man sitting across from Pritchard turned in his chair, revealing his face. Dark gray eyes fell on her, registering the same overwhelming sense of shock that rocked her to the core. In that instant, the oxygen was sucked from the room.

She blinked. Once. Twice. Three times.

The scene before her remained unchanged.

Broad shoulders. Unruly black hair. Killer dimples. Cole Bennett. This could not be happening. She wasn’t supposed to see him again—ever. So what the hell was he doing in Pritchard’s office?

“Have a seat.” Pritchard once again waved her forward like a poodle in need of coaching. Seeing no other option, she complied silently, taking the overstuffed leather chair next to Cole. She managed to avoid looking him in the eye as she crossed her legs and sat stiffly by his side. “Olivia, I would like to introduce you to Cole Bennett, my new partner.” 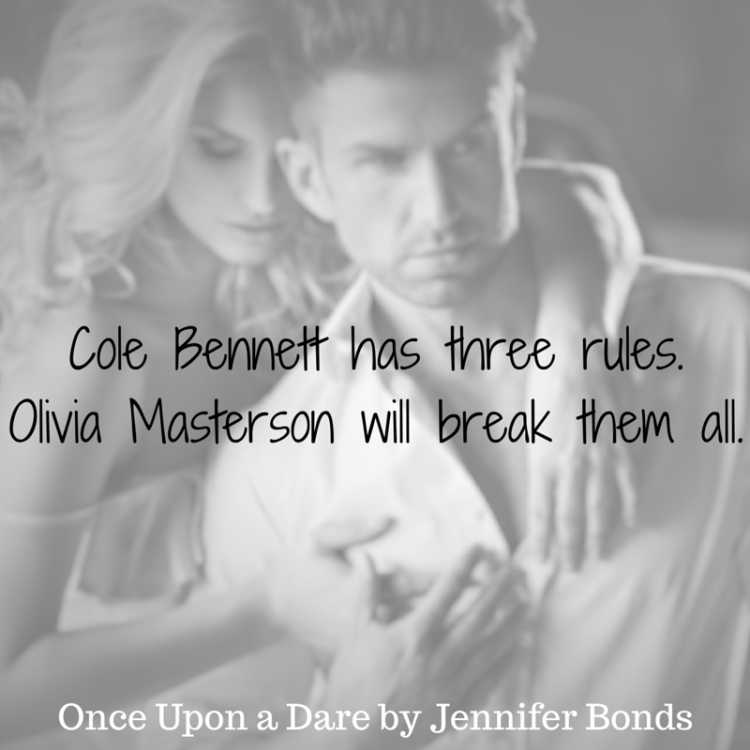 Jennifer Bonds writes sizzling contemporary romance with sassy heroines, sexy heroes, and a whole lot of mischief. When she’s not writing or wrangling toddlers, she can be found curled up with a good book and a bottle of wine. Jennifer lives in Carlisle, Pennsylvania, where her overactive imagination and weakness for reality TV keep life interesting. She’s lucky enough to live with her own real life hero, two adorable children, and a pair of rambunctious dogs. Loves Buffy, Mexican food, the Winchester brothers, and all things zombie. Sings off-key.